Ah boy.. This is a long one. If you're planning on reading this, I suggest you get yourself a drink and maybe some popcorn. Here are the patchnotes for Update 9.0 (Also known as Update 4B).

Let's start with noting some big things..
* The amount of damage taken from a damage source is no longer reduced with a simple "Protection" value (with a slight bonus when using Fire/Projectile protection respectively), but is now reduced based on the amount of specific protection you have against that damage type. For example; Fire Protection will protect you from all sorts of fire damage, but will have absolutely zero effect against melee damage.

* Additionally, with the removal of the base "Protection" value, each piece of armor now has their own set of protections which is displayed on each respective armor piece in the form of % Reduction (EG. 10% Melee Damage Reduction). This also means that something like Gravitite Armor may be better at projectile resistance than, let's say, Valkyrie Armor. You can view your total reduction values in the Armor Stats tab within your Inventory. 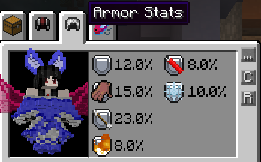 Perfect Diamond Armor
Perfect Diamond Armor is now sealed upon being crafted (this includes old armors too), and can become unsealed when combined on the floor with an Aether Orb. When the armor becomes unsealed, it will gain 1 random protection value, alongside the base, plus 1 or 2 random traits! It will also remove all existing enchantments, in the form of an Enchanted Book, as Perfect Diamond Armor can no longer be enchanted. Possible traits include;
* Double Durability (doubles the durability of the item)
* Triple Durability (triples the durability of the item)
* Jump Height (increases your jump height, similar to each piece of Gravitite gear)
* Reach (increases your reach, similar to each piece Valkyrie gear)

Tipped Arrows
Similar to Vanilla, we have added tipped arrows which apply potion effects when colliding with another mob.
These are made inside the cauldron, which is different to vanilla. Simply pour the potion into the cauldron(right click), then right click with plain old arrows, simple!
These arrows however can only be fired from your bow when they are placed inside a quiver!
Simply craft a quiver, then place it in one of your misc slots. it will then add a new inventory tab, allowing you to add the arrows into the quiver!

Loads of Fish!
Previously, Craftland was home to only 17 variants of fish (5 being event exclusive). But now, with the addition of this rework, Craftland is now home to 78 different fish, with more to come! However, with the addition of new fish comes a sacrifice. You will not be able to collect the new fish in the form of items, but rather in the form of entries. You can view all of the fish you've collected via the Fish Collection tab within your Inventory. 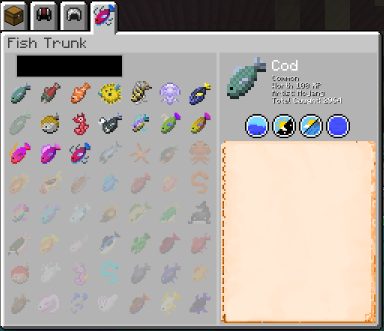 Additionally, most species of fish can only be fished at certain times of the day, during certain weather patterns, within certain biomes, worlds and one currently even desires a specific kind of fishing rod.

Loads of Rods + Tool Station
Alongside being able to find almost 80 kinds of fish, you can do so with new kinds of fishing rods! With this rework, there are now over 2,000 possible combinations of fishing rods! Some specific editions of rod, string or tackle will grant different perks while fishing. For example; a phoenix string will allow you to fish in lava, and a dressed tackle will make it easier to find rarer fish. Additionally, you now create Fishing Rods using the brand new crafting station known as the Tool Station (and soon, be able to modify fishing rods as well as other tools!)

Fishing Minigame
Lastly, fishing is no longer a simple "right click at the right time" system. It's now been extended to have a minigame which will determine whether you successfully reel in your catch or not. The goal of this minigame is to keep the green bar behind the fish as it squirms around trying to break free! You can hold the Right Mouse Button to move the bar to the right, and let go to have it drop to the left. At the end of the fishing minigame, if you reeled a fish, it will display the fish you caught on screen!

Hammers, Salvaging and Fragments
An entirely new tool type has been added to Craftland! Hammers! The more productive kind, not more magical orb shooting hammers. You can craft these hammers with the recipe specified below in Wooden, Stone, Iron, Gold and Diamond versions.

Hammers, alongside being used to break down certain blocks into simpler forms (Stone -> Cobblestone -> Gravel -> Sand), are the tools used to salvage existing tools and armors into fragments! Bare in mind, for the most part, the exchange rate for salvaging is immensely unfavorable, so only do it when necessary! In order to make this post a little smaller, the list of armors/tools to fragments will be posted on the wiki in the coming days. However, here's the list of new fragments that have been added to Craftland;
* Iron Nugget (can be crafted into Iron Ingots)
* Zanite Fragment (can be crafted into Zanite Gemstones)
* Gravitite Nugget (can be crafted into Enchanted Gravitite and floats off when thrown)
* Valkyrie Plate (can be used to repair Valkyrie tools and gear)
* Revenant Remnant (can be used to repair Revenant tools and gear)

Small Repair Updates
With these additions of the new fragments, some repair materials have been updated. For example; Valkyrie gear now requires Valkyrie Plates to be repaired and Revenant tools can now be repaired using Revenant Remnants.
The anvil also now shows what item is requried to repair another item as ghost items in the slots.

Soulbound Changes
With the plans to make more loot from events soulbound, we needed to change the soulbound system eventually to appease the large influx of soulbound items.. Here are the changes!

Soulbound items are no longer bound to your character, enderchest and garderobe with a generic tag.. Now, they're bound to your player ID and name, which opens up the ability to place these items ANYWHERE*. That's right, you can now place your soulbound costumes on display stands, in chests, display cases and more! The only exception to this rule is that they cannot be placed inside of containers that can transfer/drop or destroy items (Crafting Inventories, Dispensers, Droppers, Hoppers, Hopper Ducts, Minecarts, Shop Chests, Enchanters and Disenchanters).

Soulbound On Loot Mechanic
Alongside the new soulbound system, we've added a brand new mechanic which can be noticed with a cyan string "Becomes Soulbound once looted". If a player picks up or receives this item through their mailbox, the item will automatically become bound to them. Items with this tag will also have a Cyan B and a cyan background.

Tax on Transactions and Shop Chest Earnings
Seeing how Craftland's economy is getting worse by the day, with a constant influx of money and not enough sinks to remove it, we've decided to implement a tax on transactions and Shop Chest earnings. From now on, when trying to transfer money to another player, you will be charged an additional 1.15% before making the transaction (if you don't have the money to pay the tax, you won't make the transaction).

Loot Bags
Loot Bags have been added to Craftland! Loot Bags are bags that give you the power of choice when it comes to picking what loot you desire. Their first appearances are within the Crows Hallow event so use that event to experience them! They will soon be added to many more things such as dungeons, future events and trades! 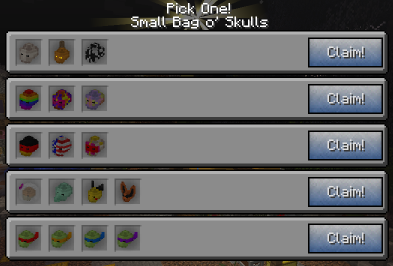 Small Goldrush Changes
* Goldrush rewards now heavily depend on the amount of points accumulated during the Goldrush.
* Goldrush 1st place coin reward math is now: 2,000 + (min(250, points) x 20) with a 2% chance to be doubled.
* Goldrush 1st place hat rewards have been updated with a min(100, points / 750) chance to be won.
* New Goldrush rewards include Citrine, Tourmaline and Spectral Pickaxes (the chance to obtain these rewards increases as you get more points during Goldrush) alongside the base Perfect Diamonds.
* The Goldrush widget displays how many coins you will win, if 1st, and your chance to win a hat.

Other
+ Added custom Name Tags (these will be event exclusive, but permanent)!
+ Added a bunch of new skins and model blocks!
+ Added the Palladium Sword (an upgradeable sword, potentially relic tier, exclusive to the Crows Hallow event)
+ Added Palladium Ore (currently exclusive to the Crows Hallow event)
+ Added Withered Ring (transform into a Wither Skeleton! currently exclusive to the Crows Hallow event)
+ Added Warrior Gummie Swet (grants Strength IV (20s) and Slowness I (10s))
* The Golem Arena Boss now has a chance to be Golden or Diamond.
* The Snowman Arena Boss now inflicts Frostbite and Frozen effects where appropriate.
* Time between mob spawns is effected to a much higher degree by number of mobs spawned, see https://www.desmos.com/calculator/psvg9cwlfn
* Ender Eyes now die when exposed to daylight.
* Ender Eyes now die faster in water.
* Non-natural Pig Zombies have a lower chance to drop items.
* Tempests have a slightly higher chance to drop White and Dark Aerclouds.
* Updated all item tool tip schemes to match the latest version of Minecraft.
* Updated the wool color scheme to match the latest version of Minecraft.
* If flag display is enabled it will now show, at the top left of the screen, when you have fasthoppertoggle enabled.
* Premium V+ members are no longer immune to losing maximum health on death.
* Premium V+ members no longer have an enchantment bonus.
* Premium members no longer have /tp cost reduction.
* Addict rank now has a 25% /tp cost reduction.
* Added inventory tabs (but these should be obvious ingame)
* Updated enchantment table to require lapis for enchants
* Ender bags are now placed in the Misc slot, and add an inventory tab to access your ender chest

* Fixed being able to create floating torches.
* Fixed White Apples being completely useless.
* Fixed the ability to pull bosses with a fishing hook.
* Fixed Aerbunny Morph from having an inverted Y head rotation.
* Fixed Pumpkins dropping damage values that shouldn't be possible.
* Fixed Item Tool Tips from overflowing the Tool Tip box when the Tool Tip is too long.

Users browsing this forum: No registered users and 5 guests